Cunningham in control as Portlaoise win away at Shannon RFC 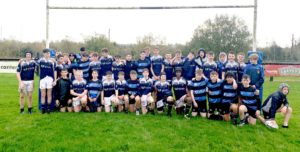 FOLLOWING a trip to Buccaneers last weekend, Portlaoise U/15s continued their tour of duty with a visit to Limerick to take on might of Shannon RFC at their Coonagh complex.

The home side are four wins from four in their section of the Munster league but, in testing conditions, a strong first half performance by Portlaoise set the platform for a fine win with out-half Matt Cunningham making a telling contribution to the game both with ball in hand and from the boot.

Shannon kicked off but it was Portlaoise straight on the attack as scrum-half Paul Byrne got the backline moving. Matt Cunningham floated a flat pass to outside centre Daniel Whelan and he broke through the defence and hugged the touchline to score in the corner.

Inside centre Aaron Fitzpatrick gathered the restart and drove at the Shannon defence and, following quick hands by Whelan and Cunningham, Zach Maginness got motoring and he sprinted clear to score under the posts. Shortly after, Maginness returned the favour and off-loaded to Cunningham who weaved his way through the defence to touch down behind the posts. Having converted both scores, Portlaoise led 19-0.

Shannon settled and had a spell in the Portlaoise 22 but some great counter-rucking by Bill Rigney, Mark Ging, and Cormac Drea saw Portlaoise recover possession and Maginness made a great run to the opposition 22 before being tackled into touch.

Shannon won the resulting lineout but the clearance kick was gathered by Byrne who put Whelan on the move and there was no stopping him as he scored to the left of the posts. Cunningham judged the breeze well as he added the extras to increase the lead to 26-0.

Portlaoise continued to pile on the pressure and wings Nicolas Ibanez and Dara Coffey were full of running and assured under the high ball as the away side kept up the pace. There was no respite for Shannon when their out-half sent a clearing kick to the Portlaoise 10 metre line. Wing forward Donnchadh Carroll gathered the ball, off-loaded to Byrne who passed to Cunningham and out-half took it from there, beating a number of players with some sublime skill to cross the line and add the extras for a 33-0 lead.

Shannon were working hard but met strong resistance up front with Joey McGuinness, David Allely, and Fionn Mullen limiting their attacking options. When they did get on the attack in the final moments of the half, Daniel Whelan was in the right place at the right time to intercept a pass and sprint clear for a converted try to leave it 40-0 to the visitors at halftime.

Portlaoise made a number of personnel and positional changes for the second half but started where they left off as a strong scrum in the Shannon 22 set them on the attack thanks to a great showing from Conor Deegan and Ricky Lyons who came into the front row. In the backline, Fionn Cuddy added presence on the wing with a strong carry, well-supported by Declan Iguma, and scrum-half Kyle Moore was on hand to release Whelan to drive over for another try which he converted for a 47-0 lead.

Shannon finally got some just reward on the scoreboard for their efforts as a period of sustained pressure yielded two tries, the second of which was converted to reduce the deficit to 47-12.

This served to spring Portlaoise back into action and Cunningham, back in the game at full-back, came into the line to great effect to sprint clear and touch down under the posts. He added the extra to stretch the lead to 54-12. The home side had the final say with a great take from a Portlaoise line-out on their own 22 and they worked the ball across the field before driving over to leave it 54-17 at the final whistle.

Thanks to the hosts for their welcome and refreshments. Portlaoise return to Leinster league action next weekend when they welcome Boyne to Togher on Sunday at 12pm.