The cast of Sunshine on Leith, which is being performed by members of Portlaoise Musical Society from this Saturday 19 November until Saturday 26 November

Portlaoise Musical Society is set to send sunshine soaring across Laois as they take to the stage at Dunamaise Arts Centre with their Irish Musical premiere of Sunshine on Leith from Saturday next, 19 to Saturday 26 November. The award-winning group is delighted to announce that they will also premiere as the first Irish amateur musical society to perform with an Irish sign language(ISL) interpreter at one of their performances – on Monday 21st November.

Irish sign language interpreter Mary Guest will accompany the show to ensure that everyone can experience the magic of this wonderful production in all its glory. A portion of seats will be exclusively reserved at this performance for those audience members who may benefit from the presence of an interpreter. Furthermore, all seats for the ISL assisted performance are priced at the reduced rate of €18 making it more accessible to a wider audience. 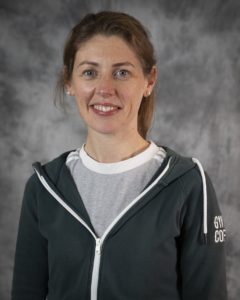 Mary, originally from Moneygall but living in Tullamore is a primary school teacher, and also a qualified ISL-English interpreter, having studied at Trinity College Dublin. Mary became interested in sign language after taking part in evening classes in Tullamore.

Secretary of Portlaoise Musical Society Hilary Treacy said: “We are so excited to finally get back on the stage and bring sunshine to the people of Laois in this gem of a show, and to present a more inclusive event to our local community. We received a lot of support from various vested individuals and organisations when we initially introduced the idea of having an ISL interpreted show, and we are so grateful to Mary that our hopes can become a reality.”

Support and encouragement was also welcomed from  Laois Arts Officer Muireann Ní Chonaill; the Sign Language Interpreting Service; Reach Deaf Services and the Abbey Theatre in Dublin who regularly run performances with the assistance of an ISL interpreter. Michelle de Forge, Director of Dunamaise Arts Centre is also glad to host the event as a test run for future events in Portlaoise that may be enhanced by ISL or other aids to assist with people’s enjoyment of the arts.

Featuring music by Scottish pop-folk band The Proclaimers, ‘Sunshine on Leith – The Musical’; who themselves sent a recent video message to wish the society well; is a funny, energetic and heartfelt piece of musical theatre about the power of home, family and love. The story follows the highs and lows of Davy and Ally, who, after coming home from serving in Afghanistan, have to re-learn how to live life in Edinburgh, together with their family and friends.

Don’t miss the timeless songs of the much-loved Proclaimers, including I’m Gonna Be (500 Miles), Letter from America, I’m on my Way and of course the emotive Sunshine on Leith performed by the multi-award-winning Portlaoise Musical Society that is sure to raise the roof off Dunamaise Arts Centre and have its audiences buzzing!

Sunshine on Leith has been a stage hit across the UK and further afield and recently enjoyed sell-out success and high acclamations at the Edinburgh Fringe Festival.  The show is full of emotion and energy with lots of enjoyment for those on the stage and those watching! The music is well known and with the talented team, crew, cast and chorus, we are confident of, yet again, raising the roof off Dunamaise Arts Centre!

As part of the front-of-house display for the show, Portlaoise Musical Society’s resident photographer, Terry Conroy and Sunshine on Leith’s Director Paul Norton will present a photographic exhibition of Edinburgh. The exhibition will also feature an additional photograph by member Derek McGinn, who is well-known in Portlaoise for his presence on the stage but also an avid sunset photographer in his spare time!

The featured photographs, which were beautifully taken in Scotland’s capital city, are truly breathtaking and show a city full of character, culture and heritage. The exhibition of photographs are on display at Dunamaise Arts Centre from Thursday 10th November and will continue for the duration of the show, and until Tuesday 29th November. The photographs are also for sale, with all proceeds going back to the society’s fundraising. Terry Conroy (Associate of the Irish Photographers Federation), is a Portlaoise-based, International award-winning photographer. This is Terry’s seventh year to photograph the society’s shows!

Sunshine on Leith is written by Stephen Greenhorn and features songs by The Proclaimers. Created & produced by Dundee Rep Theatre, Scotland’s leading production theatre. This amateur production is presented by arrangement with Music Theatre International All authorised performance materials are also supplied by MTI www.mtishows.co.uk .

With thanks to the support of People First Credit Union and Laois Arts Office, and of course AIMS.