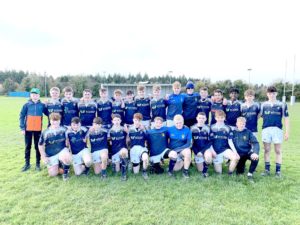 PORTLAOISE welcomed Boyne to Togher on Sunday for a noon kick-off on a cold and breezy afternoon. In a tight and tough contest, the home side were made to work hard for their victory with the outcome in the balance until late on. Joey McGuinness was the star performer for Portlaoise with Daniel Whelan continuing his rich vein of form to score a decisive try to settle matters.

The early exchanges were even as both sides sought to get the upper hand in the battle up front. Portlaoise second-rows Bill Rigney and Mark Ging were in the thick of the action as Drogheda-based Boyne impressed with their power and intensity.

Midway through the half, the away side broke the deadlock when a well-judged kick and chase from midfield saw them claim possession inside the Portlaoise 22. They recycled quick ball and broke through the Portlaoise defence to score under the posts. They added the extras to take a 7-0 lead.

The score sparked the home side into action with front-row Joey McGuinness taking the fight to the opposition with several breaks from the ruck. He was well-supported by Fionn Mullen and Conor Deegan up front in a constant battle with the opposition to gain forward momentum.

The Portlaoise pressure eventually paid off. From turnover ball at a Boyne line-out, the home side put a number of phases together with wing Cormac Paige making a strong carry before releasing Donnchadh Carroll who took a great line of attack only to be stopped just short of the line. However, Mullen was on hand to power over in the corner to make it 7-5 to the visitors.

It wasn’t long until Portlaoise crossed the white wash once again. Joey McGuinness made a strong gain from a breakdown with Cormac Drea in support to secure possession. Scrum-half Kyle Moore got the attack moving and quick hands from Matt Cunningham and Aaron Fitzpatrick put full-back Eoghan Kennedy in possession and he weaved his way through a number of challenges to score in the corner and push Portlaoise in front 10-7.

Boyne responded with a well-worked try of their own. They were working hard up front and the pressure caused Portlaoise to concede a penalty just outside their own 22. They decided to run the ball, and quick hands saw them change the line of attack and breach the home defence to score under the posts once more and regain the lead 14-10.

In keeping with the see-saw nature of the game, Portlaoise got back in front just before halftime. A scrum just outside the Boyne 22 saw the home side open up the back line and, after a number of phases with wing Declan Iguma working hard, Zach Maginness took his opportunity to beat the defence and score to the left of the posts. Cunningham added the extras to make it 17-14 to Portlaoise at the break.

The second half continued the same pattern as the first with both sides having periods of dominance but it was Portlaoise who got the scoreboard moving once again. Paul Byrne, in at scrum-half, set the back line moving and outside centre Daniel Whelan held off a number of challenges to touch down in the left corner to extend the lead to 22-14. The home side capitalised on their purple patch shortly after when Cunningham added a penalty to make it 25-14.

Credit to Boyne, they capitalised on a Portlaoise knock-on from the re-start and, after a strong scrum, they drove for the line and scored to the right of the posts to reduce the deficit to 25-19. The game was firmly in the melting post at this stage but the home side rose to the challenge. After a period of sustained pressure in the Boyne 22 where Nicolas Ibanez went close, the back line kicked into action with Cunningham making a fine break before Whelan worked his magic once again to score to the left of the posts. Cunningham added his extras to make it 32-19 at the final whistle.