Rugby – Portlaoise outclassed by a talented, young Newbridge side 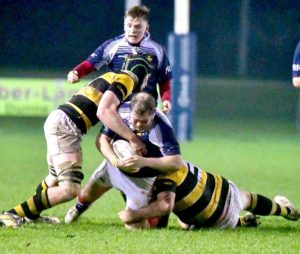 WORRYING times in Portlaoise rugby club as the men’s seniors fell to a sixth consecutive defeat on Thursday night. Portlaoise were hosting Newbridge in replay of last Sunday’s fixture, which had to be abandoned when the referee suffered a freak injury on the stroke of half time.

Portlaoise had looked good in at the weekend and made only two changes to their starting fifteen. Having impressed at the weekend for the Second XV, Jack Duffin came in on the wing for Dara Ramsbottom, who dropped to the bench. In the front row, Shane Reilly replaced Cathal Farrell at tight head.

Portlaoise got off to a great start with some big carries from Paddy Coss, Shane Reilly, and Mark Sherlock. A Jack Reddin penalty in the fourth minute gave the hosts an early lead. Portlaoise were dominating the much smaller and younger Newbridge pack, winning scrum penalties and controlling the lie out from the beginning.

Portlaoise were also looking effective around the ruck. Loose head prop, Paddy Coss was standing at first receiver and making some powerful carries, while talismanic scrum half, Jack Reddin was constantly sniping, looking for a gap or a quick pass. Second row, Mark Sherlock made tremendous carries through the middle, taking the ball over the gain line time and time again.

But after a period of sustained pressure on the Portlaoise try line, with the phases approaching double-figures, Newbridge were level on the quarter-hour mark thanks to a Robert Waters penalty.

Portlaoise were straight back on the front-foot, but could not turn the possession and territory into points as Jack Reddin missed two shots at goal. Full back, John Scully put his side into a great position with a massive kick into the corner on the 24th minute, but Newbridge toughed it out and managed to clear their lines.

The hosts kept coming, but could not get past the Newbridge defence, who’s line-speed was too much for Portlaoise to live with. The Kildare men then got themselves in front on the 31st minute through another penalty from fly half, Waters.

Portlaoise scored the game’s first try three minutes before half time when hooker, Craig Telford went over in the corner after a short line out – a well-worked, training-ground move. But Newbridge restored their lead on the whistle with a third penalty from Waters, their third score from three visits to the Portlaoise 22 leaving the score at 8-9 at half-time.

Portlaoise’s line out, which had been operating so well in the first half, really let them down in the second and it wasn’t long before Newbridge capitalised. After Portlaoise lost their own line out for the third time in a row, Newbridge began to put the ball through the hands before some long, angled passes finally found their way to full back, Jordan Nolan-Mullally who went over in the corner.

Nothing clicked for Portlaoise in the second half and the visitors played all the rugby, totally controlling possession and territory. Newbridge were almost in for a second try just before the hour mark, but had to settle for a penalty instead.

With the score at 17-8, the Kildare men simply rode out the final twenty, continuing to play all the rugby. The error count began to sky-rocket for Portlaoise in the final quarter with endless knock-ons and forward passes, forced by incredible line-speed defence from Newbridge.

It doesn’t get any easier for Portlaoise; their next game is a trip to Kilcock on Sunday the 27th to play mid-table, North Kildare. 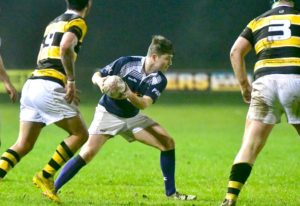 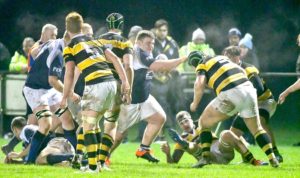 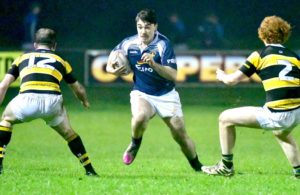 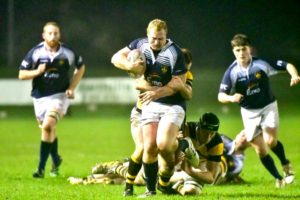 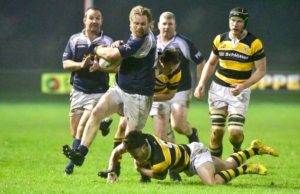