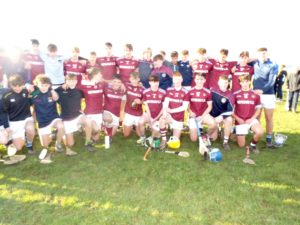 EARLIER this year Heywood claimed provincial and All-Ireland honours in football after hurling had taken a back seat for a few years. But last Monday, they sent out a message they are on the way back.

The North Leinster Junior ‘B’ final was scheduled for the LOETB Centre of Excellence but had to be moved to Mountrath CS grounds and, on a bitterly cold but sunny day, these two sides produced a well contested hour’s hurling.

Several players from both teams were part of Laois minors and development squads and some had played in the recent under-16 hurling decider between Castletown and the Harps.

Mountrath, with wind assistance, opened the scoring with a well struck point from Charlie Hand, the only Emo man on show. It would be the only time the hosts would lead and within minutes Eli Quinn had his side in front from two placed balls.

Mountrath’s Dion Cuddy converted a free from distance but Heywood piled on the pressure and added a string of points, Lochlann Curran and Luke Byrne joining Eli Quinn with well taken scores.

Mountrath rallied with Ruairi Kavanagh striking a good point. Then a good passing movement saw Cian Hill and Corey Doheny cut through the defence and when the keeper denied Doheny, Hill was on hand making no mistake from close range.

Mountrath now enjoyed their best spell and further points saw them narrow the gap before a great move by Shane Connolly saw him pick out full forward Ashton Keenan and he drilled it low past the keeper.

Further points from Corey Doheny had the sides level at the half time break, Mountrath 2-6 Heywood 1-9.

Mountrath faced the breeze, although not near as strong as earlier, and midfielder Quinn picked up where he left off converting three frees in eight minutes. Ashton Keenan kept Mountrath in touch.

Heywood were always able to respond but when Keenan and Dion Cuddy delivered two great points, the margin was down to two with ten minutes remaining. Mountrath needed to drive on but somehow Heywood found another gear and with Eli Quinn pointing from all angles they were always in the ascendency.

Mountrath battled to the finish but ran out of steam and Heywood were worthy winners.

After the game Tadgh Doran, on behalf of Leinster Colleges Council, presented the winners’ trophy to the Harps player, Eoghan Murphy and complimented Mountrath in getting the pitch ready at short notice. He also paid tribute to both teams for a fine sporting encounter. 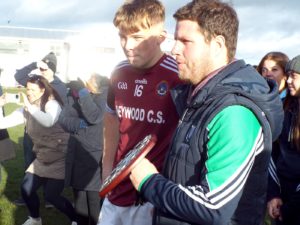 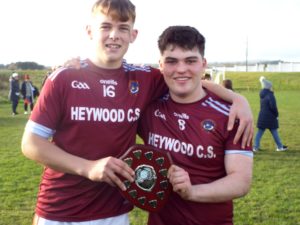