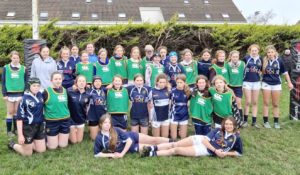 A mighty Portlaoise U/14 girls panel arrived in Tullamore on Saturday 19 November in search of a place in the Leinster Cup final. The much fancied Portlaoise side were up against an impressive Tullamore team.

The game kicked off in near freezing conditions and Tullamore immediately laid siege inside the Portlaoise 22 for what seemed like an eternity. Strong running with crisp precise passing were met by the Portlaoise wall, led by Kate Ging, Jessica Delaney and Chloe Kavanagh.

Tullamore probably deserved to come away with a score, such was their dominance in the early exchanges, however the Portlaoise defence had other ideas. Every single time Tullamore came close to crossing the line, Portlaoise were there to stop them.

Having weathered the storm, Portlaoise began their own assault. Tullamore were not eager to concede and were every bit as good in the tackle. In what was to be an intense battle through the middle for both sides, Portlaoise began to find space on the wings. Great work from Molly Kelly led to the opening score which was expertly converted by Saffron Adams.

The whistle blew shortly after for Portlaoise to go into half time leading 12-0.

The second half kicked up with the same intensity as the first. However, this time it was Portlaoise who dominated possession. Strong carries from Daisy Whitten allowed Portlaoise to gain territory inside the Tullamore 22. Quick hands from Portlaoise captain Elisha Gilligan allowed Mary O’Hara to cross the line.

Portlaoise now began to up their game. Amy Peters robbed a ball in the Line out and set up another attack. Tullamore were putting in a serious defensive effort when the ball broke to Freya Stanley and, despite close attention from Tullamore and the goal posts, smashed her way over the line for Portlaoise’s fourth try.

Portlaoise were playing the best rugby now. Aoibheann Conroy was a real threat on the wing and the scoring was still not finished. Tara Peavoy and Keelin O’Brien entered the fray and both were involved in setting up Louise Hyland, who made the carry of the day and set up the impressive Lilly Brophy for another try.

In what reads like a very one-sided affair, it was in fact very different. This Tullamore side were fantastic, great in the tackle, great runners, well-disciplined and on another day against another team would have had a different outcome. However, this Portlaoise side are a different class.

Tullamore did manage to get a try in the final moments of the game.

PRFC U/14 panel would like to thank Leinster and Ireland player, Koren Dunne, for her continued support of this talented team. Once again, she was on hand to prepare the panel in their preparations for this Leinster Cup semi-final. She travelled with the team and was more than generous in sharing her knowledge and mentored players on the day. The girls wish her continued success in her own rugby career and plans are afoot for the panel to attend one of Koren’s matches to see her in action.

The cup final, against Greystones RFC, is set for Saturday 17 December at IT Carlow grounds. All Portlaoise RFC members are urged to attend this game as this Portlaoise side are worth the trip and support of all.