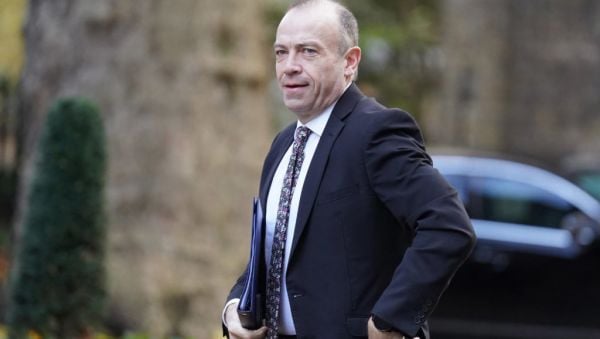 The UK government will examine revenue-raising options in Northern Ireland including the introduction of water charges if Stormont does not return, Chris Heaton-Harris has said.

The Northern Ireland Secretary delivered the warning as he set a budget to bring public finances in the region “under control”.

Outlining his spending plans in a written ministerial statement, Mr Heaton-Harris delivered a sharp message to Stormont parties – if they disagree with his budget, then restore the powersharing executive.

However, former finance minister Conor Murphy said water charges would only add to the cost of living and the cost of doing business.

The Stormont institutions collapsed earlier this year when the DUP withdrew support as part of its protest against the post-Brexit Northern Ireland Protocol.

It is with significant regret that I am now setting a Northern Ireland Budget.

I have a clear message to the NI parties; if they disagree with my budget, the best outcome is for a restored Executive to consider and revise the position I have set out.https://t.co/DXes0okb6i pic.twitter.com/MkcPHdcVPf

Civil servants are currently controlling government departments after ministers left office at the end of October when a deadline to restore the executive passed.

Departments have been operating without proper budgets for months.

It has previously been warned that Stormont departments are on course to overspend by £660 million in the current financial year.

Mr Heaton-Harris said he hoped Stormont ministers would be in place to set next year’s budget, but added he would begin planning to deal with “systemic issues” in public services.

He said: “Among the options we will examine will be water charges and/or increasing income from regional rates, to ensure citizens in Northern Ireland, and all taxpayers are treated fairly and the 2023/24 budget is balanced from the outset of the year.”

Mr Heaton-Harris said his budget for this financial year would protect health services, but he warned that the current spending trajectory in education would have to be cut.

He also said fares set by public transport operator Translink would have to rise.

He said the budget would increase public sector pay but conceded it would not be by as much as many workers would wish.

“The fact that ministers who remained in their posts during the six months from May to October 2022 have left NI’s public finances with a black hole of some £660 million is hugely disappointing,” he said.

“I believe that if the necessary care of Northern Ireland’s public finances had been taken over the last six months, the risk of overspend could have been more easily and fully mitigated.

“However, we recognise the public in Northern Ireland must be protected in future by bringing the public finances under control so it is with significant regret that I am now setting a Northern Ireland budget, as the former executive failed to do so.

“I have a clear message to the parties – if they disagree with my budget, they should restore the executive to consider and revise the departmental position I have set out.”

He continued: “For health, this budget provides £7.28 billion in funding, an increase of £228 million above 2021/22 spending, which included significant Covid-19 funding, or £786 million if we compare to last year’s funding excluding the one-off Covid-19 funding.

“This will protect spending to address the critical health pressures in Northern Ireland.

“It also ring-fences funding for abortion services, as ensuring availability of services is a statutory duty on me as Secretary of State.

“For education, this budget provides £2.6 billion in funding, which is an additional £286 million on top of last year’s spending (after excluding accounting for one-off Covid support in 2021/22).

“This will protect spending for programmes such as free school meals, home-to-school transport, the Extended Schools and Sure Start programmes, all of which support those who need it most.

“However, even this level of increase will require significant reductions in current spending trajectory levels to live within budgetary control totals.”

Concluding his budget statement, Mr Heaton-Harris said the need for action to put Northern Ireland public finances on a sustainable footing could “no longer be put off”.

He said: “Steps need to be taken now to address the systemic issues that are facing public services and address the long-term sustainability of NI’s finances.

“I must repeat, I am only bringing forward this budget legislation because the Northern Ireland parties have failed to display the necessary political leadership for which they were elected.”

He said that budget legislation would be brought forward in due course.

Sinn Féin MLA Mr Murphy said: “A three-year budget which I proposed to the executive should have been agreed months ago to enable proper planning of public services.

“The DUP’s refusal to allow the executive to set a budget and its subsequent collapse of the institutions has left departments struggling to control spending and now a one-year budget has been set towards the end of the financial year.

“This is hugely damaging for public services, particularly the health service which desperately needs financial certainty.”

Regarding the potential for water charges, he said: “This will only add to the cost of living and the cost of doing business.

“It is essential that the executive is restored so that local elected representatives can protect people from the full impact of Tory policy.”