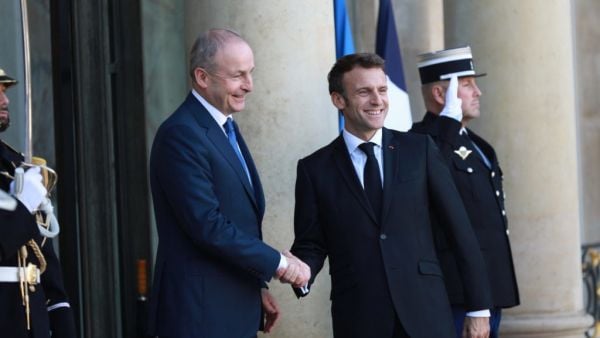 Russian strikes on infrastructure in Ukraine is making life “uninhabitable” for people in the country, the Taoiseach has said.

Micheál Martin said the attacks on the country’s energy network is “terrorising” civilians in Ukraine.

Russia has been attacking the power grid and other facilities with missiles and exploding drones for weeks.

We discussed the deepening ties between our nations, cooperation on energy and trade, and our unequivocal support for the people of Ukraine.https://t.co/3rhJd07Sa1 pic.twitter.com/dOVd09FQ03

The two leaders discussed the ongoing war in Ukraine.

“We discussed a range of issues, obviously the broader geopolitical situation in Europe and the war on Ukraine, and the appalling, horrific attacks on the people of Ukraine over the last number of weeks,” Mr Martin said after the meeting.

“Particularly the attacks on the critical infrastructure, on energy, and terrorising of civilians within Ukraine.

“Clearly with the objective of making life uninhabitable for Ukrainians. I think it’s shocking. From our perspective, that’s a war crime in terms of the singular focus on the people.”

Mr Martin was asked whether he is concerned that an increase in the number of refugees in Ireland could lead to a rise in far-right protests.

“I think Ireland hasn’t had that far-right sort of viewpoint in terms of being a critical mass. It hasn’t achieved critical mass yet in Ireland,” Mr Martin said.

“But one always has to be careful of exploitation situations. There has genuinely been a very warm welcome to many Ukrainians across Ireland.

“Communities have opened up their schools, Ukrainians coming into Ireland have access to our health services, access to schools.

“What is often very heart-warming is when, due to accommodation pressures sometimes, children are moved, (and) the first people to protest on behalf of the Ukrainian children are Irish teachers.

“The balance is that Ireland has been very positive by a significant degree and over 60,000 have come into Ireland, which per capita is quite high.

“There was a challenge on the international protection then as well, in terms of numbers are far higher than we would have anticipated, and certainly are nearly three times what we would have experienced pre-Covid in 2019, and that’s causing concern in terms of just sheer capacity to manage those numbers.

“I think we should look at the positives of this.”

He said he is concerned that the rise in attack on Ukraine’s energy infrastructure could push more Ukrainians out of the country.

“It seems to a more intense tactic now being deployed by Putin,” Mr Martin added.

“That could create further migration from Ukraine because that is what he wants to do.

“I think Europe has to stay solid. We have to hold our nerve and stay united across the European Union against real challenges.”