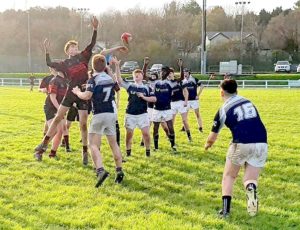 Portlaoise successfully compete for possession from this lineout against Waterpark

ON a crisp sunny Sunday afternoon in Waterford, Portlaoise U/15s took on the challenge of Ardkeen-based Waterpark in what started out as an end-to-end encounter but ultimately turned out to be comprehensive win for Portlaoise.

This was a great opportunity for the Portlaoise squad to get valuable game time and even though they started with a changed line-up, they started brightly and took the lead after just two minutes through a converted Daniel Whelan try after some strong carries by Eanna Moynihan, Fionn Mullen, and Cormac Drea.

Waterpark responded quickly to make in 7-5 with barely five minutes on the clock. From the resulting kick off, Moynihan secured a turnover and after a line break by Fionn Cuddy, Daniel Whelan was over the whitewash again for another converted try to make it 14-5.

Once again Waterpark responded quickly with a try down the blindside which was converted to make it 14-12. However, after a concerted period of pressure in the Waterpark 22, Daniel Whelan gathered and fed Mark Ging who powered over the line. Whelan added the extras to make it 21-12.

Waterpark continued to show great fight and once again responded with a try to make it 21-17. From the resulting Portlaoise kick-off, they won a scrum and Moynihan picked off the base to sprint clear and dot down under the posts, with Whelan adding the conversion to make it 35-17.

After a period of pressure from Portlaoise, Waterpark kicked downfield from their 22. Full-back Eoghan Kennedy gathered and made strong gains back into the 22. From the resulting ruck, Darragh Coffey fed Daniel Whelan who raced clear to complete his hat-trick and convert the try to make it 35-17 with 30 minutes gone.

Waterpark were not taking this lying down however and scored again to make it 35-22. However, in an exact repeat of his previous try, Moynihan once again carried off the base of the scrum to beat a number of defenders to bring the score to 40-22.

Portlaoise started to ring the changes at this point and the fresh legs and skills of the replacements took the game beyond doubt in the final twenty minutes. Conor Deegan, Declan Iguma, Paul Byrne, Donnchadh Carroll and Aaron Fitzpatrick added extra energy allowing Portlaoise to dominate the closing stages.

Four tries in 20 minutes from replacement full-back Matt Cunningham, who brought an added dimension to the Portlaoise attack through a combination of speed, skill, and strength, was of particular note. In addition, a third try from Eanna Moynihan and four conversions by Whelan completed the scoring for Portlaoise to leave it 73-22 at full time.

Portlaoise continue their strong momentum with another fine win. This performance was underpinned by the depth and strength of the Portlaoise squad, with a number of players operating in new positions and a number of new combinations both in the pack and the backline. This is testament to the skill and commitment of the players and the quality of the coaching from the management team of Glenn, Brendan, Dave, Darry and Frank. 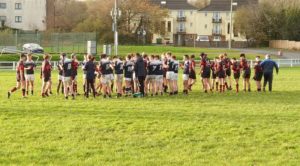