Today at the World Cup: Japan stun Spain to go through as Germany head home 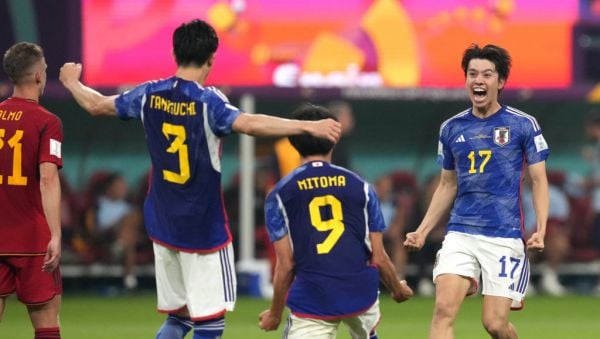 Germany failed to make it out of the World Cup group stage once again as Japan booked their place in the last 16 on another night of high drama in Qatar.

Hansi Flick’s men beat Costa Rica 4-2, but it was not enough to progress after Japan came from behind to defeat Spain and top Group E.

Belgium’s hopes ended after a goalless draw against Croatia, but there was joy for Morocco who beat Canada to top Group F and make it through to the knockout stage for the first time since 1986.

Here, the PA news agency takes a look at how the day unfolded.

Following a shock defeat to Japan in the opening game and a scrappy draw against Spain, the four-time world champions knew only victory would keep their dreams alive and then hope the other result in the group went their way.

Serge Gnabry gave the Germans an early lead at the Al Bayt Stadium, where France’s Stephanie Frappart became the first woman to referee a match at the men’s World Cup.

However, Costa Rica – who had beaten Japan after being thrashed 7-0 by Spain – equalised through Yeltsin Tejeda in the second half before going ahead when Juan Pablo Vargas bundled the ball in.

If results had stayed that way, Costa Rica would have gone through at Spain’s expense, but Germany hit back through a double from substitute Kai Havertz before Niclas Fullkrug wrapped things up late on, but the fate of Flick’s men had already been sealed.

Spain had looked in total control at half-time after taking the lead through Alvaro Morata’s early header.

Japan, though, turned things around in the space of five minutes at the start of the second half.

Substitute Ritsu Doan equalised before Ao Tanaka netted another – which was allowed to stand following a lengthy VAR review after the ball had appeared to have gone out of play.

The Samurai Blue held out for another memorable victory, which set up a clash with Croatia for a place in the quarter-finals.

Morocco advanced to the knockout stage of a World Cup for the first time in 36 years after beating Canada 2-1 at the Al Thumama Stadium.

Canada, who had already been eliminated, fell behind early on when Chelsea winger Hakim Ziyech was gifted the opening goal and Youssef En-Nesyri doubled Morocco’s lead.

An own goal from Nayef Aguerd gave Canada renewed hope just before the break and substitute Atiba Hutchinson hit the crossbar during a much-improved second half, but Morocco held firm to celebrate a memorable achievement.

After losing to the Atlas Lions, the pressure was on Belgium for their final group game against Croatia.

The Red Devils, though, again drew a blank at the Ahmad Bin Ali Stadium, with second-half substitute Romelu Lukaku seeing a late chance hit the post as Croatia got the point they needed to progress as runners-up.

Belgium came into the tournament sitting second in FIFA’s world rankings, but failed to impress. Following the match, head coach Roberto Martinez confirmed it would be his last in charge.

“We’ve been able to build a real legacy,” the former Everton boss said. “I know a lot of people say you can only build a legacy by winning a major tournament, but I see it in a different way.”

All 25 players are out at training today as the #ThreeLions turn their attentions to Sunday’s @FIFAWorldCup last-16 tie against Senegal. pic.twitter.com/CTFZSi5AiI

England midfielder Declan Rice believes Gareth Southgate’s “world-class” squad deserve to be feared as they step up preparations for the last-16 clash with Senegal on Sunday.

Having roared back from a drab goalless draw against the United States to beat Wales 3-0 and secure top spot in Group B, England’s attacking talent again caught the eye.

“It’s top, top level,” West Ham midfielder Rice said. “Why should we not be feared? I think other nations will always look at us and think about the quality we’ve got in the squad.

“If you look at our attacking players, there are world-class, unbelievable talents across the board.”

Picture of the day

We did what we had to tonight, but over the three games, it wasn’t enough.#GER #FIFAWorldCup #CRCGER pic.twitter.com/jzXQhE9OgH