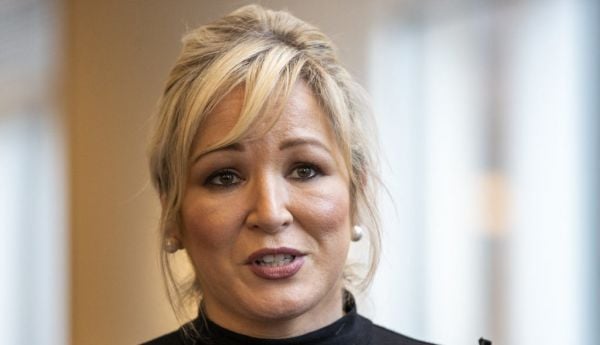 Sinn Féin has launched another attempt to recall the Stormont Assembly to elect a speaker and restore the powersharing institutions.

The party’s vice president, Michelle O’Neill, lodged a recall petition with the speaker’s office on Friday calling for an executive to be formed to deal with the cost-of-living crisis.

A party source said they expect to collect the required 30 MLA signatures that would see the Assembly recalled next week.

The recall petition states that the Assembly should debate why people in Northern Ireland have not yet received energy support payments.

The motion states: “That this Assembly expresses deep concern that struggling families and households have not received the £600 (€699) payment that many are desperately relying on, calls on the DUP to end its boycott of the Assembly and supports the immediate appointment of an executive to provide urgent help for those struggling with the cost-of-living crisis through the winter months.”

Several previous attempts to recall the Assembly have failed as the DUP has not supported the election of a speaker, without which no other business can take place.

The unionist party has refused to engage with the devolved institutions in Belfast in the wake of May’s Assembly election, meaning it has not been possible to form an executive.

The DUP boycott is part of a campaign of opposition to Brexit’s Northern Ireland Protocol and it says it will not return to powersharing until decisive action is taken to remove the protocol’s economic barriers on trade between Great Britain and Northern Ireland.

Negotiations between the UK Government and the EU to resolve differences over the protocol are continuing.

Households in the region are due to be credited with a £400 payment automatically, to help with energy costs this winter as part of a UK-wide scheme.

In his autumn statement, UK Chancellor Jeremy Hunt said all households in Northern Ireland would receive an additional £200 payment, in recognition of the region’s dependence on home heating oil.

While consumers in the rest of the UK have already begun to receive their payments, there has been no decision about how and when the payments would be made in Northern Ireland.

UK Business minister Graham Stuart told the Commons this week that he cannot see the Energy Bill Support Scheme payments being issued to Northern Ireland before Christmas but is hoping to “stand that up” in January.

He also said that it should be the executive in Northern Ireland dealing with the payments.

Sinn Féin has repeatedly stated that had the Stormont institutions been in place, then the payments would have already been made.

But the DUP has disputed this and has blamed the Westminster Government for holding up the payments.