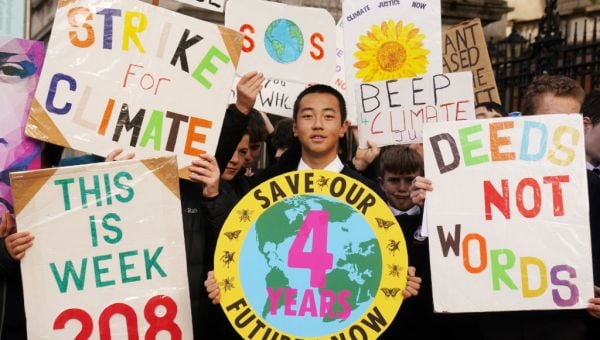 Climate Minister Eamon Ryan has described the weekly protests by student climate strikers for the last four years as “inspirational”.

The Green Party leader said students’ willingness to stand in protest, make a banner and raise their voices gives “hope” and “dispels fear”.

Schoolchildren of all ages held a demonstration on Friday to mark 208 consecutive weeks – four years – of climate protest outside the gates of Dáil Éireann.

The students are calling for politicians to take urgent action on climate change.

“For 208 Fridays in a row there have been people standing in this spot demanding climate action,” Mr Ryan told pupils demonstrating outside the gates of Leinster House in Dublin.

For 208 Fridays, these young people have stood outside the Dail.Sending an important message ;that we need to act now to secure our future.

They are an inspiration & play a vital role in amplifying the voice and message of our young people.#FridaysForFuture pic.twitter.com/VVxNZSV9rd

“You could give up hope, you can be very despairing sometimes when you look at the science. But we have to retain that hope, that sense that we can actually protect our future.”

The students held colourful banners and posters calling for climate action. They were joined by environmental activists and other supporters to mark the occasion.

Mr Ryan told the crowd that he had recently returned from the United Nations climate change conference, Cop27, in Egypt.

“While it wasn’t perfect, while you would tear your hair out as to how long it takes and how slow it is, but there is a change coming,” he said.

“There is real ambition now to make the change we need to make. And do it in a way that brings justice. That we protect those most vulnerable countries.

“It’s really important we do it here at home. That’s why I think you’re important. It’s bringing it home, outside our Dail every week…that act, that stepping out. Be willing to do the hard thing. Stand in protest, make a banner, raise your voices. That gives hope. That dispels fear.”

“It’s made a difference, don’t stop,” he added.

The international climate movement began in 2018 when then 15-year-old Greta Thunberg and other youth activists protested outside the Swedish parliament every school day for three weeks to highlight the lack of action on the climate crisis.

Since then students have been holding protests outside parliaments across the world every Friday.