The death has been announced of Pascal Coss, Manor Lane, Mountmellick

The death has been announced of Pascal Coss, Manor Lane, Mountmellick 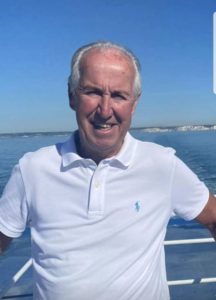 Pascal Coss, passed away on 7 November and his wife Susan Coss passed away on 10 October 2017 in London, England. He is predeceased by brother Noel Coss and sister Ann Clearey. Pascal and Susan are remembered by their daughter Kerry Quinn her husband Paul and three grandsons Bobby, Paul jnr, Jack. Also, by their son Justin Coss his partner Mirjam and grandsons Lewis, Thomas and his son Patrick Coss. Also remembered by his sister Dinah Moore and brother Herny Coss and many dear family and friends.

Requiem Mass at 12.00 noon to St Joseph’s Church, Mountmellick. Interment of cremated remains will take place in the family grave in St Joseph’s Cemetery. Sympathisers can express their sympathy on the online section on R.I.P.ie.

The Mass will be live-streamed on www.mountmellickparish.ie