Pope Benedict XVI: a humble servant of the Lord 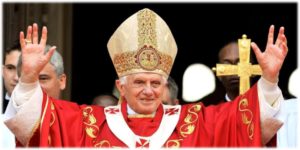 IN THE annals of papal history, Joseph Ratzinger, who has died aged 95, will be remembered principally as the first pope in 600 years to retire, rather than to die in office. Any other achievements of his eight-year pontificate as Benedict XVI – and a few were worthy of enduring note – will ultimately be overshadowed. First, by the manner of his going, and second because his papacy came between that of two controversial and larger-than-life figures, his long-time boss Karol Wojtyła, John Paul II, and Jorge Mario Bergoglio, Francis, the self-proclaimed pope “from the ends of the earth”.

In doctrinal terms, Benedict spent his time in charge tweaking the legacy of the 27 years of the Polish pontiff. The conservative settlement that John Paul had imposed, with Cardinal Ratzinger’s able and unswerving assistance, on the great theological battles that had followed the reforming second Vatican council of the 1960s remained fundamentally undisturbed during Benedict’s reign. The victories already achieved in the last decades of the 20th century over more liberal Catholic voices regarding questions of sexual morality, clerical celibacy, the place of women and religious freedom were, as far as Benedict was concerned, secure. His pontificate, then, is best seen as an extended postscript to the one that had gone before.

But that is not the whole picture. There are three principal ways in which it differed. First, Benedict was not by inclination so dominant or overbearing a character as John Paul. He was able to break new ground in the modern history of the papacy by occasionally uttering the word “sorry”: sorry for allowing a Holocaust-denier, the British-born priest Richard Williamson, back into the fold in 2009, an error made – as Benedict humbly admitted in a letter to the world’s Catholic bishops – because he and those around him in the Vatican had not been sufficiently up to speed with modern means of communication to check the internet and see Williamson’s offending remarks. Sorry, too, for any offence caused by a lecture at Regensburg University in Germany in which Benedict quoted disparaging remarks about the prophet Muhammad; and sorry, repeatedly, to the world and to victims for the crimes of paedophile priests.

This final apology was part of the second way in which Benedict’s papacy deserves to be seen as distinctive. He was the first pope to look the abuse scandal in the eye and attempt to tackle it. He may have made only a start, but his predecessor had simply swept it under the carpet and even given sanctuary to known abusers. Benedict withdrew that protection and promised a thorough review that would stop such a betrayal happening again. Delivery of the promise, though, was patchy.

His third claim to be his own man came when he surprised even those close to him in February 2013 by resigning, on the grounds that he was simply too old and too ill to carry the burdens of leading a global church of 1.2 billion. Hardly a revolutionary thing for an 85-year-old man to say, you might think, but it has almost always been the tradition of popes to die in office, emphasising that theirs was a God-given job and therefore one that only God could release them from by calling them back to him.

Benedict’s abrupt departure created short-, medium- and long-term problems for the Catholic Church. The cardinal electors negotiated the first of these challenges better than expected. Their choice of Cardinal Bergoglio from Argentina was made quickly and decisively, and sent out a powerful signal to the world that Catholicism had recognised the need for a new approach.

The medium-term problem was the fact that there were suddenly not one but two popes. Part of the mystique of the office is that it elevates just one man above every other member of the Church, and indeed the main argument long used against papal resignations, even when the incumbent was so physically or mentally frail that they could not function as a leader, was that this unique source of authority would be divided in an organisation that runs on hierarchical principles. If you are going to have an absolute monarch, you cannot have two pretenders.

On this occasion there was just one uncomfortable incident, in January 2020, when, in a foreword to a book by a deeply traditionalist colleague, Benedict warned Francis not to relax rules on priestly celibacy. When it made headlines, Benedict immediately asked that his name be removed from the text. Some believed the offending passage had been added by those who looked after him.

Whether or not you regard the prospect of subsequent popes resigning when they reach a certain age as a long-term problem depends on your view of the papal office. Resignations sit uneasily with the traditional belief that the pope is a quasi-divine figure, with a hotline to heaven. For all his theological and doctrinal conservatism, and his delight in the trappings of his ancient office, Benedict clearly did not.

Born in the village of Marktl am Inn, Bavaria, Joseph was the third child of three and second son of a former hotel cook, Maria (née Peintner) and a police commissioner, also Joseph, both devout Catholics. His childhood was unusual because of the extraordinary piety of the family, which separated him from his contemporaries. There was never, it seems, a time when young Joseph did not want to be a priest.

His father’s opposition to the Nazis is reported to have curtailed his police career. A lasting memory for Joseph was, as a boy, seeing Nazi supporters beat up his local parish priest in Traunstein near the Austrian border. On another occasion, in 1941, a younger cousin who had Down syndrome was taken away by Nazi officials under their eugenics programme to perish with many others.

Membership of the Hitler Youth was compulsory for the two Ratzinger boys. Like other 16-year-olds, Joseph was called up in 1943, serving first with an anti-aircraft battery in Munich and then with an infantry unit on the Hungarian border, before finding himself for six weeks in an American prisoner of war camp. The end of the war meant he could resume his studies for the priesthood and he was ordained in 1951, on the same day as his elder brother Georg.

It was often easier for otherwise loyal Catholics concerned by the draconian actions of the Vatican in regard to popular, liberal theologians to blame Ratzinger rather than John Paul II. The pope managed to evade any sort of categorisation within his lifetime, not least by dint of his personal charisma, while, as his right-hand man, the apparently dour, inflexible Ratzinger was a more convenient target. But, as pope, Benedict largely avoided such targeting of individuals. The attack on dissidents was, it seems, his master’s bidding.

As John Paul’s health failed, Ratzinger stepped into his shoes ever more to become prominent as the spokesperson for Catholic orthodoxy, fearless in attacking those aspects of secular culture that he saw as wrong-headed. He talked often of his desire to return to the Bavarian village of Pentling, near Regensburg, to take up again his theological writings. If he could have chosen a way to spend his time, it would have been reading, researching and writing about Catholicism. To that end, he tried three times to retire after suffering a stroke and then heart complications – which eventually required him to have a pacemaker fitted – but he was persuaded by a now physically needy John Paul to stay at his side.

When the Polish pontiff died in April 2005, it fell to Ratzinger as dean of the College of Cardinals to lead the tributes, organise the funeral and open the conclave to choose a new pope. He performed all three duties impeccably, so that to his fellow cardinals he suddenly appeared the obvious candidate, though he had not been regarded as the frontrunner beforehand.

No cardinal will ever admit to wanting to be pope, but, had he ever harboured hopes, Ratzinger must surely have concluded, with his 78th birthday almost upon him, that his moment had passed. As well as his age and indifferent health, there was a chorus of demands from many influential voices in the Catholic Church for a radical change of direction. And yet, against the predictions of most commentators, it was Benedict who emerged from the Sistine Chapel after just two days of voting as the oldest incoming pope since Clement XII in 1730 and only the second non-Italian in almost half a millennium.

Describing himself as a ‘humble worker in the Lord’s Vineyard’, may this remarkable friend of the Lord rest in peace.

Fr Paddy Byrne: The gift of generosity this Christmas