Determined display not enough to save Portlaoise 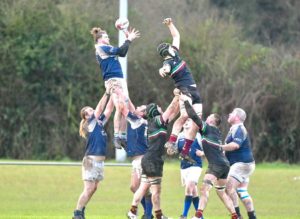 THERE is no denying that the Dublin visitors to Togher were deserving winners but the final score line did not do justice a determined Portlaoise display. The home side were under the cosh for a lot of the game but it was not until the final quarter that DLSP managed to add on four quick tries.

Portlaoise had defended defiantly, hold back what at times was a ver5t strong assault. IN fact the visitors would have been disappointed at the number of occasions that Portlaoise players got in over the ball just when they had looked like scoring.

Survival in Division 2A is now near impossible for Portlaoise but on a positive note they can be very happy with the displays of four of their youngest players.

Glen Connolly has proven to be quite a find at wing forward. For a young man he displayed huge determination and courage. Likewise, second row Ronan Donlan is a player who is growing into his role. His ability to win line out ball is crucial for the side.

In the backs centre Brian Keane was by no means overawed playing against the older players. He was always willing to have a cut and put on some cracking tackles. Wearing number ten, Matthew Coonan showed he has the ability and temperament to make at this grade.

The game could hardly have started worse for Portlaoise. The ball was knocked on from the DLSP kick off. From the ensuing scrum they ran the ball at the heart of the Portlaoise defence and crossed under the posts. The conversion was added.

Midway through the half Portlaoise put their best move of the period together but just when they looked like they might make the breakthrough the ball was knocked on.

DLSP were somewhat fortunate to extend their lead on the half hour mark. They kicked to the corner from a penalty. Portlaoise disrupted their lineout and turned the ball over. However, from the ensuing DLSP lineout they spread it wide for the winger to score in the corner making it 0-12.

This was how it remained until the half time break and Portlaoise would have been quite happy with that.

Once again the visitors dominated the start of the second half but were unable to break down a stoic Portlaoise defence as the home side began to come more into the game.

They got the break they needed midway through the half. Jack Reddin threaded through a lovely kick which crossed the sideline 10 metres or so from the DLSP line. Portlaoise won the lineout and when driving to the line the maul was collapsed giving the home side a penalty.

They opted for a lineout from which Ross Cooper won possession. He set up a maul which was making ground before collapsing. However Cooper regained possession, drove at the defence before slipping the ball to Mark Sherlock to crash over in the corner. Jack Reddin landed a magnificent conversion and now only five points separated the sdies entering to the final quarter.

But that was as good as it would get. In the end fitness told and DLSP scored four more tries to give the scoreboard an undeserving one sided look.

It got even worse for Portlaoise who had Robin Foot and Craig Telford red carded apparently for backchat. This would seem a very harsh decision for such an offence. 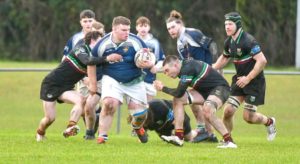 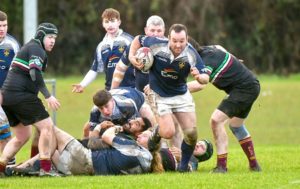