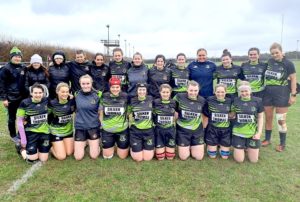 PORTDARA Falcons picked up yet another win in the Women’s Leinster League on Sunday, beating Dublin side, Balbriggan. The win not only maintains PortDara’s 100% home record for the season, but it also moves them level on points with Mullingar at the top of Division 2.

It was a cold, wet day at Lea Road and the conditions certainly did not lend themselves to high quality rugby. PortDara had Balbriggan pressed back in their own half for the first twenty minutes of the game, but did so without ever creating a chance.

Then came a moment of brilliance from star full back, Eve Kehoe to break the deadlock. Hannah Mulcahy released Kehoe in midfield who bobbed and weaved in and out past numerous Balbriggan defenders, eventually powering over the line and grounding the ball for a fantastic individual try.

Kehoe is such a naturally gifted player. Whenever she gets the ball in broken play there is an immediate change in energy. She carries a certain air of expectation on her shoulders – but she wears it well.

Ten minutes later and PortDara were in again. Centre, Ruth Downey gathered a loose ball on the Balbriggan ten-metre line, made a trademark big carry, beating three defenders before a deft kick through. She chased the kick herself and got the reward, grounding the ball for a second individual try for the Falcons.

The second half was a turgid affair as defence was on top for both sides. Falcons’ flankers, Francie Fitzpatrick and Alexandra Pop were outstanding as usual. The pair got through a remarkable amount of work – in the tackle, on the ground, at the set-piece and with ball in hand. The pair exude leadership and commitment every time they take the field.

There was a rare start for Máiréad Scully – a completely different kind of scrum half to the regular 9, Kate Tynan. Scully played well and attacked the line, keeping the Balbriggan defence on their toes. When Tynan did come on, she immediately changed the tempo of the game. Her quick thinking is always evident and her instinct to tap and go at every opportunity brings a whole new level of pace to PortDara’s game.

Fly half, Hannah Mulcahy is the creative pivot that makes PortDara’s attack so dangerous. She paired well with both scrum halves, but her natural partnership is with Kehoe. They link up well together – a dangerous prospect for any side once the pair get going.

Rebecca Rowe was excellent on the right wing, as she has been all season. She made some incredible breaks to get around the outside defender; Balbriggan needed some big last-gasp tackles to prevent the winger from getting over the line.

Balbriggan’s Laura Brown and Clíodhna Ní Chonchobhair were the stand-outs for the visitors and the pair combined to win a penalty late in the second half, allowing Balbriggan to kick the only score of the second half and rescue a losing bonus point in the process.