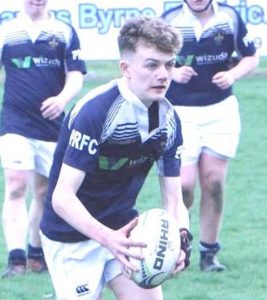 Mark Cunningham in action for Portlaoise

ON a cold Sunday morning in Drogheda, Portlaoise turned in their best performance of the season to take the points and remain top of the Leinster U/15 Premier League.

The visitors set the platform for the win with some great attacking play in a free-flowing first half. Out-half Matt Cunningham dictated affairs with a fine overall performance that included some excellent kicking and a hat-trick of tries.

Boyne kicked off and, after claiming possession, attacked towards the Portlaoise 22. However, great counter-rucking by second-row Cormac Drea and wing-forward Donnchadh Carroll saw scrum-half Kyle Moore release centre Daniel Whelan who got Portlaoise on the attack. Cunningham was in support on the loop and skilfully evaded a number of tacklers to sprint clear and touch down under the posts. He added the extras for a 7-0 lead.

Boyne did well to gather their re-start and put a number of phases together but, once again, they met strong resistance with the front-row combination of Joey McGuinness and Fionn Mullen driving back the home side who conceded a penalty at the breakdown. Quick-thinking by Moore got Portlaoise on the attack with inside centre Aaron Fitzpatrick driving hard at the defence before passing to Whelan who delivered a well-timed off-load to blind-side forward Zach Maginness who took the ball at pace and broke through the cover to score to the left of the posts. The extras were added to increase the lead to 14-0.

It wasn’t long before Portlaoise were on the attack again. Hooker Conor Deegan led the charge from his own 22 and Drea and Mullen made strong carries from rucks before captain Eanna Moynihan took matters in his own hands and shook off a number of tackles to reach to Boyne 22. He had the presence of mind to off-load to Whelan who used a lovely hand-off to break the defensive line and touch down on the left. Once again, the extras were added to stretch the lead to 21-0.

Credit to Boyne, they came back into the game and had a sustained spell of possession in the Portlaoise half. They were repelled by a great tackle on the left by wing Cormac Paige before making good progress on the right and were in touching distance of the line before full-back Eoghan Kennedy calmly cleared the lines. This served to spring Portlaoise into attack and, shortly after, Fionn Cuddy scored the try of the match as he beat a number of players up along the left wing and touched down in the corner. Cunningham added the extras from the touchline for a 28-0 lead.

With their tails up, Portlaoise piled on the pressure and the points followed. From a scrum on half-way, Whelan once again tormented the defence with some great footwork to score under the posts and, a few minutes later, Cunningham used his pace to beat the defence as he hugged the right touchline before crossing the whitewash. He converted both tries to make it 42-0 at the break.

Boyne were a different team in the second half and dominated the early exchanges. Some tough tackling by Ricky Lyons and Mark Ging kept the home side at bay but they eventually got their reward with a try on the left that was converted to leave it 42-7.

Back came Portlaoise with Paul Byrne, in at scrum-half, raising the tempo and a fine flowing move eventually resulted in a line-out deep inside the Boyne 22. Second-row Bill Rigney and Carroll combined to win the line-out and, after great play by Maginness and Whelan, No. 8 Moynihan drove through the defence to score on the right to move the lead out to 47-7 lead. The final score of the game came after good defence by Cullen Kirwan and great counter-rucking by Stephen Conroy and Deegan. Byrne got the back line moving once again and after strong gains by Fitzpatrick and Carroll, with support from Nicolas Serrano and Dara Coffey, Cunningham took possession and powered up the left wing before touching down under the posts to complete his hat-trick. He added the extras to make it 54-7 at the final whistle. 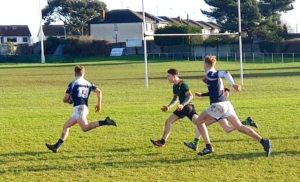