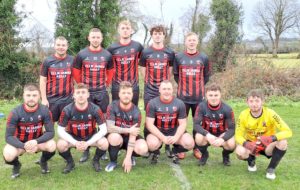 EMMET Jones was the star of the day on Sunday, scoring a hat-trick to guide St Aengus into the second round of the Combined Counties Cup. Playing at home, the Division 2 side from Mountrath needed extra time but came out on top against Division 1 high-flyers, Stradbally Town.

It was all St Aengus in the opening 15 minutes. They were set up in a very attacking 3-5-2 formation and looked intent to keep hold of the ball. Jason McCormack had a very lively start up front, getting in for two great chances inside ten minutes that produced two great saves from Stradbally goalkeeper, Jack Larkin.

Having weathered the early storm, Stradbally began to work their way into the game. Centre forward, Eoin Buggie was making some inviting runs behind the defenders and coming deep looking for the ball.

Stradbally took the lead after 20 minutes when Brendan Lawlor received the ball to his feet, unmarked in the box, and finished from a tight angle. The Division 1 side were on the front foot after the goal but lost the momentum back to St Aengus towards the end of the half.

McCormack was causing the Stradbally defence all sorts of problems and felt he had two shouts for a penalty in the first half. Eamon Delaney at centre back had a great game but McCormack kept him on his toes from the very first whistle.

Jamie Dooley almost got the sides level just before half time. His long-range shot had Larkin beaten but came down off the crossbar into the grateful hands of the goalkeeper.

The Mountrath men were back on terms soon after the break, however, when Emmet Jones scored a screamer of a volley. And moments later Jones made it 2-1 from the penalty spot after Damien Murphy brought down Jason McCormack. Larkin got a good hand to the penalty and turned it onto the post but he could not keep it out.

Stradbally had shown little in the way of creativity in midfield but they finally got into a groove in the final twenty minutes of normal time. Liam Knowles, and Brendan Lawlor both came close, but they were repelled by a stubborn St Aengus defence – Evan Cuddy the stand-out performer. But the equaliser did finally come in the 85th minute when Eoin Buggie curled the ball into the bottom corner of the St Aengus net, sending the cup tie into extra time.

Both sides were tired during the additional twenty minutes and neither produced many chances. Stradbally pushed hard for a winner but it was the home side that finally found a goal with three minutes left to play.

Jones completed his hat trick when he got on the end of a cross from the right wing, heading the ball into the net and St Aengus into the second round of the Combined Counties Cup.