Laois musician giving it a fair wallop with her bass guitar 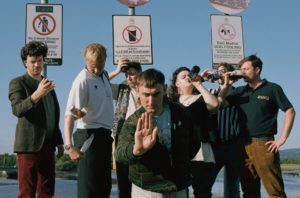 They’ve been described as a rabble-rousing band that taps into the political power of folk, punk and hip-hop. The combo that brings booze, sex and politics back into folk music in Ireland.

That description can only be attributed to one band in Ireland at the moment: The Mary Wallopers.

The group was established just over six years ago by brothers Charles and Andrew Hendy and their mate Seán McKenna in a shed at the back of their rented house in Dundalk, where the trio gained cult status with their livestream gigs during Covid.

Just over two years ago, they decided to expand the band and called on Portlaoise bass guitarist Róisín Barrett to join them.

At a loose end at the time, Róisín, a well-established figure on the Irish music scene, had been playing with her funk/jazz band Fever Solstice, but due to the Covid virus that devastated live music venues across the country, it split up. 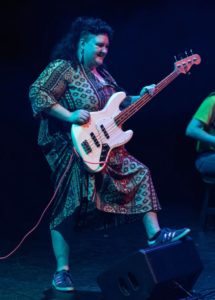 The daughter of Sheila and Joe, Róisín has two brothers, Pádraig and Diarmaid. She began playing acoustic guitar at the age of five and progressed onto the mandolin before taking up the bass guitar, which she says is now her instrument of choice. Following her leaving cert in Scoil Chriost Rí in Portlaoise, she went to the Rock College in Ballyfermot, where the five-piece Fever Solstice was formed. While gigging and working in Dublin, she furthered her studies at Newpark Music Centre, which is linked to the renowned Berklee College of Music in Boston.

Just back from playing at the prestigious Eurosonic Noorderslag (ESNS) in Amsterdam and from a hectic non-stop 34-venue sell-out tour of Germany, Holland, Ireland, England, Scotland and Wales, the 25-year-old says she has no intention of letting up on her frenetic lifestyle with The Mary Wallopers.

She said: “I had known the Hendy brothers for a few years before they asked me to play with the Wallopers. They used to gig around as a caustic, immoral hip-hop outfit known as TPM (TaxPayers’ Money), who went viral with songs like F**k RTÉ and The boys on the dole.

“It’s been a roller-coaster ride with the band since I began gigging with them. We’ve played in some amazing venues right across Europe and are now set to storm North America and Canada in March with our unique style of folk,” said Róisín.

“One of the highlights of the last couple of years with the Wallopers,” she said, “was the gig in my hometown of Portlaoise.

“Kavanaghs was jammed to the rafters, and we went down a bomb. It was rocking. It was great seeing all my old school mates there, who told me afterwards they never experienced such a gig in their lives.”

Róisín also mentioned another Portlaoise musician who joined The Mary Wallopers for one of their gigs.

“Patrick Critchley, who is a painter in Limerick, also plays drums. He comes from the well-known Critchley family in Portlaoise. We had a gig in Limerick and just days before it our drummer ended up breaking his foot at the Electric Picnic. We asked Patrick to fill in and he proved his worth. He’s some bad-ass drummer.”

With their self-titled debut album The Mary Wallopers now featuring in all the charts, a nomination for the upcoming Album of the Year Awards at the RTÉ Radio 2 Choice Music Awards and their upcoming American/ Canadian tour in March and later in the year another tour of Britain, what’s next for the Portlaoise bassist?

“Don’t know,” was her chirpy reply.

“We’re going into the studio next month, where we hope to begin work on our second album. After that, we’ll take one day at a time.”

“With the other cursing and rowdy shower of gung-ho balladeers in the Wallopers, you just don’t know what’ll happen from day to day. “But there’s one sure thing: we intend to continue to be rowdy, boozy and irreverent and not take ourselves too seriously. If we can rip the piss out of ourselves, sink a few pints, sing and play a few tunes along the way, then that’ll do me for now,” she said, with a mischievous glint in her eye.

WATCH:  The Mary Wallopers performing one of their songs from their debut album by clicking on here.