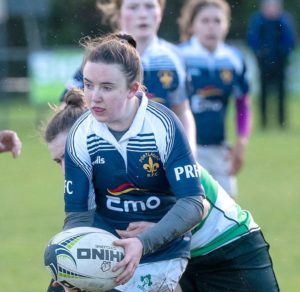 THE score line does not tell the full story of this game, flattering a Naas side who were far from four tries to one better than Portlaoise when the sides met in Togher on Sunday. The hosts were the better team in the first half, no doubt about it, and deserved a lot more from the game.

No. 8, Rebecca Mullen was the vocal leader, organiser and decision maker on the field and put in a fantastic performance in the back row. Mullen was the main jumper in a line-out that worked well all afternoon. Her back row partner, Jade Laffan also played tremendously well, making a lot of big tackles and carries for her team.

Tight head prop, Rosie Palmer was one of the stand-out performers in the first half and her work was rewarded with a try on the half-hour mark. Portlaoise attacked off a five-metre line-out and remained patient with the ball, building phase after phase until Palmer was in position to crash over for the try.

Naas had only two real attacks in the first half, one either side of the Palmer try, but managed to score on both occasions. Winger, Aoife Furlong went over in the corner after ten minutes when Naas worked the ball from right to left off a powerful attacking scrum. The second try came on the stroke of half time when fly half, Sheena Hubbard turned out of the tackle and got over – a killer blow for Portlaoise.

In the second half, the hosts again looked the better side. Scrum half, Jennifer Keegan was kicking well from hand and injecting pace off ruck ball. In the midfield, Sandra Keegan got through a lot of unseen work and made some huge carries for her team.

The forwards got through a lot of work and provided their backs a great platform off set pieces. Hooker, Patrique Biggs can be especially proud of her throwing accuracy. The pack were dogged in defence and attacked the gain line with real purpose.

Portlaoise had a purple patch midway through the second half and twice built sustained pressure in the Naas 22. A rolling maul first followed by a series of pick-and-drives looked to have breached the Naas defence, but both times the ball was held up.

The Kildare side did eventually pull away and got in for two late tries to secure a winning bonus point. Full back, Zoe Dunbar with the try of the afternoon after a brilliant solo run before Ciara McKeown put the icing on the cake with the final try. The Naas scrum half getting a try to cap off a player of the match display.

Portlaoise are back in Togher next week as they welcome local rivals, PortDara Falcons. Portlaoise remain rooted to the bottom of the table, while PortDara are top, level on points with Mullingar.

The Premier hand out a lesson to Laois