Portlaoise hockey do the double at the weekend 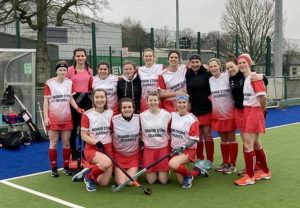 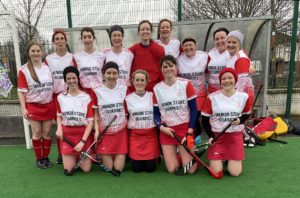 PORTLAOISE first and second hockey teams were in action on Saturday with both teams securing a winning result.

The firsts welcomed Weston second team to their home venue in Loreto College, Kilkenny in a hope to continue their winning streak and remain top of the Leinster Women’s (LW) Division 7 league table. The home side knew this was going to be a battle from the first whistle as the Weston team, with just a few narrow defeats, would be ready to challenge the home side.

The visitors started the game on the front foot by putting the Portlaoise defence line of team captain Liz Poustie, Susan Sugrue, Holly Ogilvie and Claire Igoe under enormous pressure. The ladies held them off until a cross into the circle found a free Weston player who managed to slip it pass goalkeeper, Laragh Wilkinson.

The ladies settled in the second quarter providing opportunities for themselves and getting the ball to the forwards. Their efforts were rewarded just before the half time whistle when a cross by April Kent was chipped in by Amy Moynan.

The ladies continued to dominate into the second half, keeping much of the possession and creating chances for the forwards to shoot at goal. Their efforts paid off when, with about five minutes to go, another cross from April Kent found the stick of newcomer Joanne Claxton who flicked it high into the net with a reverse stick.

A strong team effort for the remaining minutes of the game kept Weston at bay and gave the ladies the 2-1 win they truly deserved.

Portlaoise seconds travelled to Portrane Community School in Donabate on Saturday morning to face Portrane ladies. The visiting team had a slow start but gathered momentum in the second quarter putting a lot of pressure on the home side’s defence.

The newly formed forwards began to pick holes in the home side’s defence and was patiently waiting the opportunity to get over the goal line. Some great attacking moves in the third quarter culminated in a well-deserved goal by Evana Cassidy.

Portrane came back fighting after the goal, however, this was no match for the experienced Portlaoise defence which kept the home side at bay.

The final quarter was tough for both teams as the home side desperately went in search of the levelling score but some valiant defensive efforts kept the scoresheet clean under the calm leadership of captain, Averil Atkinson and vice-captain, Jayne Telford.

The visiting side enjoyed Portrane’s hospitality afterwards to finish off a super day for the club.

Next week Portlaoise firsts are travelling to face Pembroke Wanderers while the second team are set to play Muckross at home in Loreto College Kilkenny.

The Premier hand out a lesson to Laois