SPIRITED DISPLAY NOT ENOUGH TO SAVE PORTLAOISE 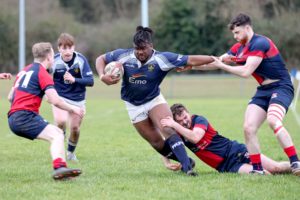 Josh Ikarzi (Portlaoise) drives at the heart of the Coomine defence during the Leinster League Division 2A game in Togher on Sunday      Photo: Paul Dargan

A BIT like a week previous, when they lost to DLSP, Portlaoise lost out to another Dublin club when Coolmine proved too strong for the home team, but it was not all doom and gloom. That said it is hard to see the positives in yet another defeat that surely now condemns Portlaoise to Division 2B for next season.

The main positive is that there are a number of younger players making the grade and they have brightened up things a bit. Latest recruit, Josh Ikarzi certainly impressed in his inside centre role, displaying ability and determination in both defence and attack. It was his cheeky pass between his legs that led to Tommy Martin scoring his and Portlaoise’s second try late in the game.

Despite their position at the bottom of the league table, the players have to be complimented on their determination and spirt, battling right to the final whistle even when the result had become a foregone conclusion.

The pack had to be shuffled about after Robin Foot and Craig Telford saw red the previous week. There was a further reshuffle when hooker Ryan McEvoy picked up a bad looking knee injury, but this time it worked to their good.

Harry Lalor had to switch from prop to hooker while Paddy Coss came in at open head and from there to the end Portlaoise dominated the set piece, so much so that when the home side were penalised for a few crooked lineouts, the visitors opted for another line out rather than taking the scrum.

But that is not to suggest that Coolmine ever really looked like loosing this game. They played at a greater pace and direct running that Portlaoise could not compete with. And the winners cause was helped to some degree by some very poor defence from the Portlaoise side. Add to that poor decision making and there was Always going one result.

Coolmine opened the scoring in the 11th minute. A Portlaoise drop out, after the Coolmine full back was off target with a penalty, fell to the visitors’ winger and he raced through the cover from 40 metres out before popping the ball to the centre to score. The conversion was added.

But five minutes later Portlaoise were right back in it. They elected to tap and run a close in penalty before moving it wide where Martin crossed the whitewash.

But again from a kick off, disaster. While three Portlaoise players  stood watching the ball the Coolmine winger nipped in between, gathered and again flew through the cover. They were awarded a penalty when a Portlaoise defender failed to roll away and now thy had 10 points on the board.

Now another kick off and this time it did not travel the 10 metres and from the ensuing scrum the Coolmine full back racing in under the posts untouched. They were to add another try before half time at which time they held a 5-24 lead.

To their credit Portlaoise came out fighting ion the restart and dominated the second half for long periods. That said, while they came close to scoring on a few occasions, mainly through the efforts of their forwards, they were held out by some sterling defending from Coolmine.

However, a late rally from Coolmine saw them score another try in the 74th minute, but it was not all over quite.

Portlaoise finished strongly and camped inside the visitors’ 22. There efforts were rewarded when, after putting huge pressure on the Coolmine line, the ball was whipped left where Ikarzi flicked between his legs to Martin to score.