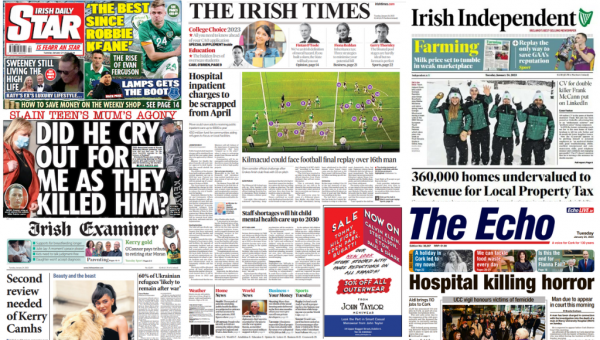 The fallout of a report in child and adolescent mental health services, comments from the mother of Keane Mulready-Woods, and a charge in connection with the death of an elderly man at Mercy University Hospital in Cork are among the stories on the national front pages.

The Irish Times reads: ‘Hospital inpatient charges to be scrapped from April’, in line with plans announced in Budget 2023. The paper also carries an image from Kilmacud Crokes’ win over Glen in the All-Ireland Senior Club Football final on Sunday amid controversy that the Stillorgan club had an extra man on the field for the closing minutes of the game. 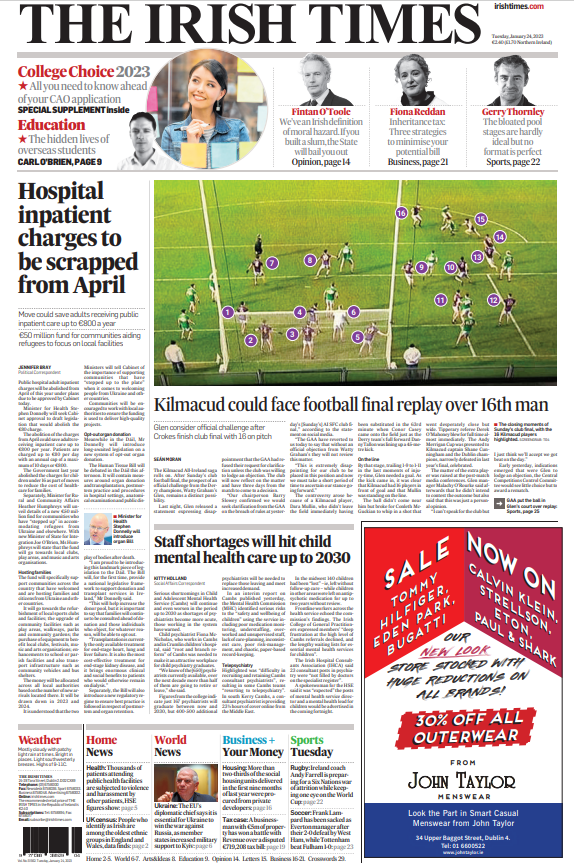 Meanwhile, the Irish Examiner says a second review into mental health services for young people is needed in Kerry, while officials believe more than half of Ukrainian refugees will remain in the State after the war. 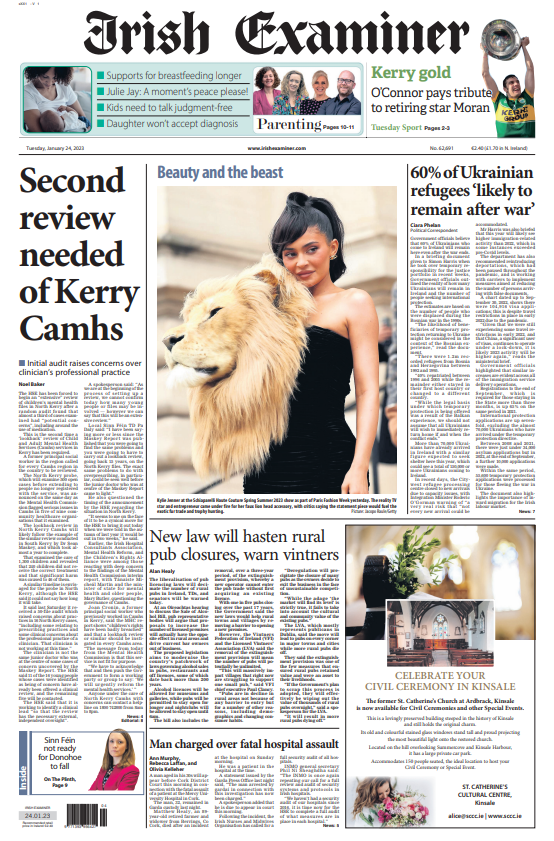 The Echo reports on the man charged in connection with the death of Matthew Healy at a hospital in Cork over the weekend, while the Irish Independent reports that some homeowners have undervalued their homes to Revenue in order to pay a lower amount of Local Property Tax. 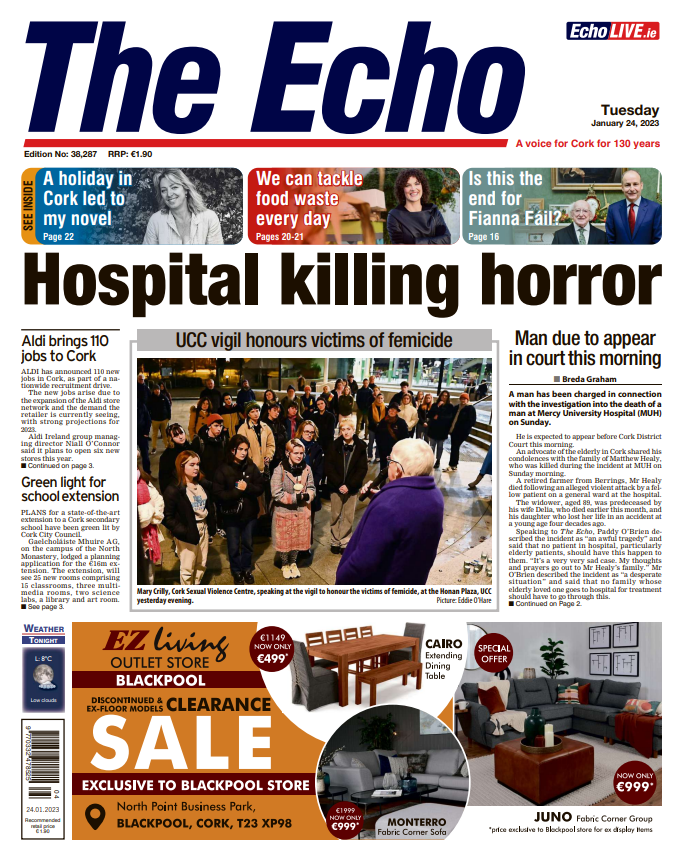 Here is the front page of today’s Irish Independent pic.twitter.com/8bzwttJLPf

The Irish Daily Mail leads with a ‘withering’ review of the State’s housing strategy, while both the Irish Daily Star and Irish Daily Mirror report on the Keane Mulready-Woods case after the Special Criminal Court heard a victim impact statement from the teen’s mother on Monday.

For all the big news and sport, plus your brilliant Good Health pullout, pick up a copy of Tuesday’s Irish Daily Mail, or click on https://t.co/wKUyK4AHpD pic.twitter.com/JwnYnwEuKH 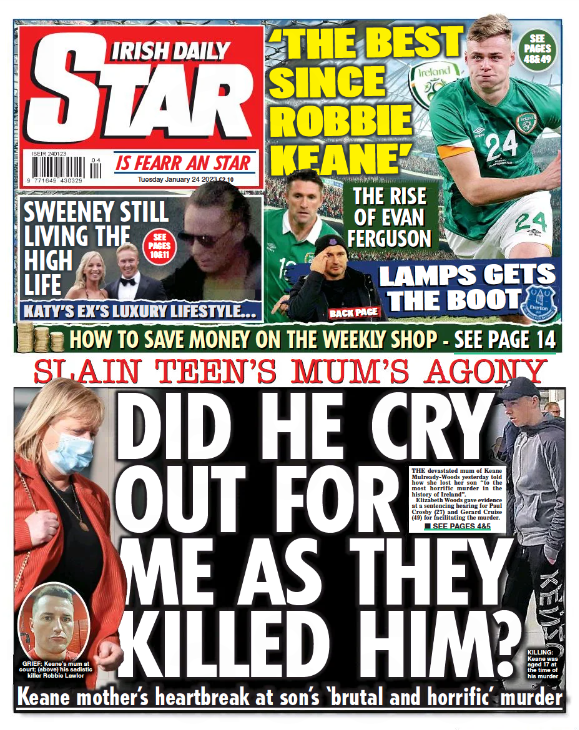 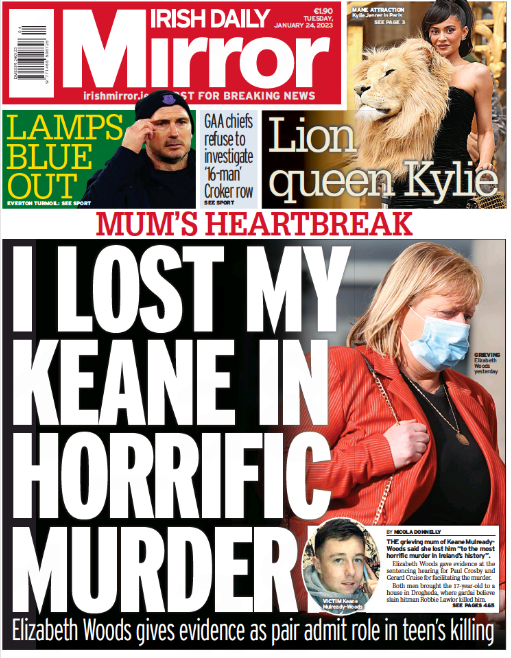 In Britain, allegations against the Conservative Party chairman in the papers continue to pile pressure on British prime minister Rishi Sunak.

The Financial Times says Nadhim Zahawi is fighting for his political life, with Metro, The Guardian and the i all reporting Mr Sunak has ordered an investigation into the former chancellor’s tax affairs.

The Independent has just one question about Mr Zahawi’s future – “How can he keep his job?” – while the Daily Star admits readers do not “need a lettuce to see how this one ends”.

Tuesday’s INDEPENDENT Digital: “How can he keep his job?” #TomorrowsPapersToday pic.twitter.com/c7deuFWzcS

“The only way is ethics”, states the Daily Mirror, which adds that there is now pressure on Mr Sunak to shown his own accounts.

Tuesday’s Daily MIRROR: “The Only Way Is Ethics” #TomorrowsPapersToday pic.twitter.com/afiaohh1Av

Meanwhile, the story of an Afghan asylum seeker previously convicted of murder in Serbia who then killed a young man in Bournemouth in a row over an e-scooter leads The Daily Telegraph and Daily Express.

The front page of tomorrow’s Daily Telegraph:
‘Killer posed as a child to claim asylum and murder again in UK’#TomorrowsPapersToday
Sign up for the Front Page newsletterhttps://t.co/x8AV4Oomry pic.twitter.com/jpLvK3aQRC

Former British prime minister Boris Johnson asks “what the hell is the West waiting for?” as he calls in the Daily Mail for Ukraine to be given all the weapons it needs to defeat Russia.

Tuesday’s Daily MAIL: “What the hell is the West waiting for?” #TomorrowsPapersToday pic.twitter.com/LMD3B1RZSP

The Times carries concerns that rogue candidates could be employed by the Metropolitan Police, due to them not being interviewed in person.

And The Sun reports Noel Gallagher’s estranged wife Sara McDonald has hired the lawyer of Britain’s Prince Harry and his wife Meghan after filing for divorce from the Oasis rocker.