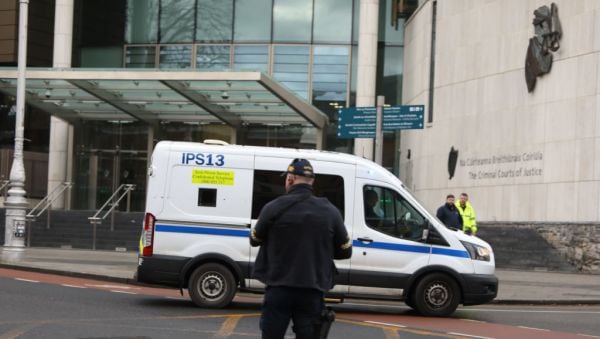 Gerard ‘The Monk’ Hutch was one of two gunmen disguised in tactical gear who shot Kinahan Cartel member David Byrne in a “brutal and callous execution” as the victim scrambled on the ground of the Regency Hotel amongst “complete carnage”, and should be convicted of murder, a prosecution barrister has told his trial at the Special Criminal Court.

Fiona Murphy SC for the Director of Public Prosecutions submitted in her closing speech today that portions of a secretly recorded 10-hour conversation between Mr Hutch and ex-Sinn Fein councillor Jonathan Dowdall clearly showed the accused was “the man in charge”.

Ms Murphy said the covert recordings show Mr Hutch had authority over the AK-47 rifles used in the attack and was seeking someone to assist in diffusing the aftermath of the very serious situation that developed.

She said that Mr Hutch was talking about the movement of the weapons at a crucial time in which they ultimately ended up in transit and seized by gardai from convicted IRA man Shane Rowan just two days later.

Ms Murphy said there was “no denial or pushback” from Mr Hutch in the audio against implications that he was centrally involved in the Regency attack.

However, Mr Hutch’s barrister senior counsel Brendan Grehan argued on Wednesday in his closing address that the prosecution case against his client stands or falls on whether the Special Criminal Court can believe the evidence of the “proven and admitted liar and perjurer” Jonathan Dowdall.

Mr Grehan told the court that Dowdall is a “master manipulator” who decided he would give evidence against Mr Hutch to get his own charge of murdering David Byrne dropped.

Counsel said the only evidence against Mr Hutch, besides Dowdall’s “flawed” testimony, is an eight-hour audio recording of conversations between Mr Hutch and Dowdall in which the prosecution alleges the accused made tacit admissions about his role in the shooting at the Regency Hotel.

Mr Grehan submitted: “I challenge anyone to find any unambiguous admission to involvement in the Regency anywhere in the transcript.” He said there were lots of references in those recordings that contradicted the prosecution case and while there were numerous references where a court could conclude that the “Hutch gang” were involved in the Regency attack, he said, “the Hutch gang cannot be equated with Gerard Hutch”.

He said that the prosecution had suggested the tapes showed that on March 7th, 2016 Mr Hutch had control over the guns used in the Regency attack when he was allegedly bringing them north to gift them to the IRA.

Ms Murphy submitted it was apparent from the audio recording that “a plan is being formed as a way to hand over these three ‘yokes’,” she added. In the audio recording, Mr Hutch was heard telling Dowdall that “these three yokes we’re throwin them up to them either way”, in what the prosecution has said is a reference to giving the three assault rifles used in the Regency Hotel attack to republicans in the North.

The trial has heard that three AK-47 assault rifles were found in the boot of a car following “an intervention” by gardai just a month after Mr Byrne was fatally shot in the Regency Hotel.

Ms Murphy said Mr Hutch’s responses to Dowdall in the audio showed at worst a tacit acceptance of Mr Hutch’s central involvement in the Regency, but in truth it was almost an expression of pride in the choice of the weapons.

She added that what isn’t in the audio is any denial. Counsel went on to say: “There is no reaction from Mr Hutch [in the audio] to deny what is being alleged and it points to an acknowledgement that he was part of the team at the Regency and it doesn’t demure from the fact that it would be a lie to say he never did the Regency”.

Ms Murphy said the prosecution accepted that Dowdall – the State’s witness – was a man who had a “serious conviction” for a “disgusting” separate crime, but this did not mean the judges could not believe his claim that the accused had confessed to the killing.

Ms Murphy said the audio set out the key matters in the case against Mr Hutch. Clearly, she said, “the three yokes” were a reference to the AK-47’s, they were the “gift of Gerard Hutch to give”, showing he was in control and were his “to do with as he wishes”. Significantly Mr Hutch has control over the rifles at a time approximate to the Regency shooting, she said.

Much of what is in the recordings, Mr Grehan argued, could amount to Mr Hutch getting involved after the Regency attack “to try to deal with the fallout”.

He said the recordings could suggest that Mr Hutch travelled north to speak to republicans “to try to find an alternative to more bloodshed”. He said there was talk of “mediation and peace talks” and that Mr Hutch was “somebody to stand and be guarantor for the extended Hutch family”.

Mr Grehan also conceded that there were “arguably things said and discussed” in the recordings that “could suggest serious criminality on the part of Gerard Hutch.” But he reminded the court that his client is not charged with conspiracy to commit crimes and the prosecution has “nailed its colours to the mast” by charging Mr Hutch with murder.

Gerard Hutch (59), last of The Paddocks, Clontarf, Dublin 3, denies the murder of Mr Byrne (33) during a boxing weigh-in at the Regency Hotel on February 5th, 2016.

Mr Hutch’s two co-accused – Paul Murphy (61), of Cherry Avenue, Swords, Co Dublin and Jason Bonney (52), of Drumnigh Wood, Portmarnock, Dublin 13 have pleaded not guilty to participating in or contributing to the murder of Mr Byrne by providing access to motor vehicles on February 5th, 2016.

Jonathan Dowdall, a former co-accused of Mr Hutch who facilitated Mr Byrne’s murder and turned State’s evidence, has said that Mr Hutch told him in a park several days after the Regency attack, in or around Monday February 8th, 2016, that he and another man had shot Mr Byrne at the hotel.

The former politician testified that Mr Hutch said he “wasn’t happy about shooting the young lad David Byrne and David Byrne being killed”.

Brendan Grehan SC, representing Mr Hutch, told Dowdall that the defence position was that he had told “two big lies” to the court in his direct evidence, namely that his client had collected keys cards for a room at the Regency Hotel from him and his father on Richmond Road on February 4th 2016 and that Gerard Hutch had “confessed” to him in a park several days later.

The State’s case is that Mr Hutch had asked Dowdall to arrange a meeting with his provisional republican contacts to mediate or resolve the Hutch-Kinahan feud due to the threats against the accused’s family and friends.

The Special Criminal Court has viewed CCTV footage of what the State says is Mr Hutch making two separate journeys to Northern Ireland with Dowdall on February 20th and March 7th, 2016, just weeks after Mr Byrne was murdered.

The prosecution has played a 10-hour audio recording of a conversation between Mr Hutch and Dowdall while they were allegedly travelling north to a meeting in Strabane in Co Tyrone on March 7th, 2016 in Dowdall’s Toyota Land Cruiser, that had been bugged by garda detectives.

Mr Byrne, from Crumlin, was shot dead at the hotel in Whitehall, Dublin 9 after five men, three disguised as armed gardaí in tactical clothing and carrying AK-47 assault rifles, stormed the building during the attack, which was hosting a boxing weigh-in at the time. The victim was shot by two of the tactical assailants and further rounds were delivered to his head and body.

Mr Byrne died after suffering catastrophic injuries from six gunshots fired from a high-velocity weapon to the head, face, stomach, hand and legs.